First reported more than 200 years ago, dental erosion still continues to be a major concern for dentists and consumers. Twenty decades ago, studies reported dental erosion occurred because of industrial hazards, specifically when workers were exposed to acidic aerosols. In recent years, everyday foods and drinks such as lemons, pickles, sodas and sugary, starchy goods have been associated with tooth erosion. People now also need to be aware of another danger that causes permanent and severe loss of tooth structure, acid reflux induced erosion, a condition that occurs when stomach contents reflux into the mouth, according to a study that appeared in the March/April 2009 issue of General Dentistry, the Academy of General Dentistry’s (AGD) clinical, peer- reviewed journal.

According to the U.S. Department of Health and Human Services, more than seven million people suffer from severe acid reflux. However, David Lazarchik, DMD, lead author of the study notes that, “patients often are not aware of the damage that reflux-induced erosion has caused to their teeth until it has reached an advanced stage of destruction.”

The potential of hydrogen, or pH, is a standard way to measure the acidity of a sustance. It is measured on a scale of 0 to 14. A lower pH means that a solution contains more acid. The higher the pH, the more alkaline (or non-acidic) the solution. “Dental enamel begins to dissolve at a pH of 5.5,” says Dr. Lazarchik. “Because stomach acid has an extremely low pH of 2.0, it has the potential to cause significant chemical erosion.”

Certain foods, beverages and habits are known to cause acid reflux and as preventive measure, individuals should be aware of the products they consume. Spicy, fatty, fried foods, citric fruits and beverages and dairy products can lead to acid reflux.

In addition to taking the steps necessary to establish a healthier eating lifestyle, AGD Vice President, Fares Elias, DDS, FAGD, says, “When visiting a general dentist, it’s important to make him or her aware of any medical conditions and medical history in general.” “In some cases, other medical conditions, not directly related to your oral health, may be the cause for problems associated in the mouth,” says Dr. Elias, who has also experienced acid reflux. “Treating reflux-induced erosion without treating and preventing the medical condition that causes the erosion may only lead to more severe problems for your oral health in the future.” 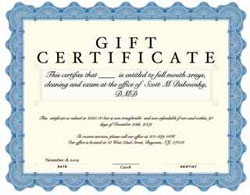